The Ecumenical Patriarchate is the foremost ecclesiastical of the Orthodox Church throughout the world, tracing its history to the Day of Pentecost and the early Christian communities founded by the Apostles of Jesus Christ. According to tradition, the “First-Called” of these Apostles, Andrew, preached the Gospel around Asia Minor, the Black Sea, Thrace Achaia, where he was martyred. In 36 AD, he founded the Church on the shores of the Bosphorus in the city known then as Byzantium, later Constantinople and today Istanbul. St. Andrew is the Patron Saint of the Ecumenical Patriarchate; his Patronal Feast is celebrated on November 30.

The title “Ecumenical Patriarch” dates to the sixth century and historically belongs to the Archbishop of Constantinople. As Archbishop of Constantinople-New Rome, Ecumenical Patriarch Bartholomew occupies the First Throne of the worldwide Orthodox Christian Church, presiding in historical honor and fraternal spirit as “first among equals” of all Orthodox Primates. These include the ancient Patriarchates of Alexandria, Antioch Jerusalem, as well as the more recent Patriarchates of Moscow, Serbia, Romania, Bulgaria and Georgia. Beyond these, the Ecumenical Patriarch has the historical and theological responsibility to initiate and coordinate common activity among the Orthodox Churches of Cyprus, Greece, Poland, Albania, the Czech Lands and Slovakia, Finland, Estonia, as well as various Archdioceses and numerous Metropolitan dioceses throughout the world, such as in Europe, America and Australia. Moreover, he is responsible for convening pan-Orthodox councils or meetings, facilitating inter-church and inter-faith dialogues, while serving as the focal point and primary spokesman for Orthodox Church unity as a whole. Transcending national and ethnic borders, the Ecumenical Patriarch is leader to 300 million Orthodox Christians worldwide. 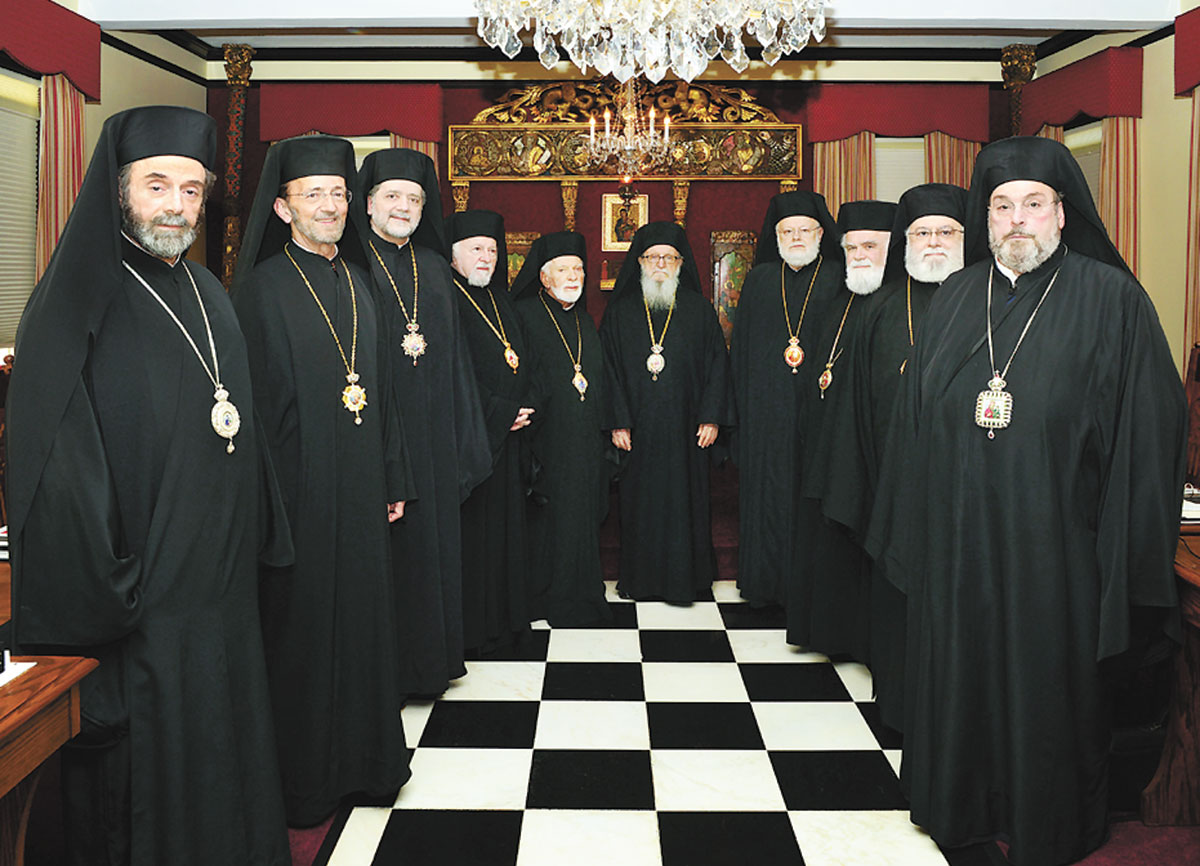 Holy Eparchial Synod of the Greek Orthodox Archdiocese of America

His Eminence Archbishop Demetrios, Geron of America
Primate of the Greek Orthodox Archdiocese of America Among the first, Lord, remember our Archbishop ELPIDOPHOROS: grant him to Your holy churches in peace, safety, honor, and health, unto length of days, rightly teaching the word of Your truth.

His Eminence Archbishop Elpidophoros (Lambriniadis) of America was born in 1967 in Bakirköy, Istanbul. He studied at the Department of Pastoral Theology, Thelogical School of the Aristotle University of Thessaloniki, from which he graduated in 1991. In 1993, he finished his postgraduate studies at the Philosophical School of the University of Bonn, Germany submitting a dissertation entitled, “The Brothers Nicholas and John Mesarites”. He was ordained a Deacon in 1994 at the Patriarchal Cathedral and was appointed as the Codecographer of the Holy and Sacred Synod.

In 1995, he was appointed Deputy Secretary of the Holy and Sacred Synod. From 1996-1997 he studied at the Theological School of St. John the Damascene in Balamand, Lebanon, where he improved his knowledge of the Arabic language. In 2001, he presented a doctoral dissertation at the Theological School of the Aristotle University of Thessaloniki under the title: “Severus of Antioch and the Council of Chalcedon” proclaiming him a Doctor of Theology. In 2004, he was invited to Holy Cross Greek Orthodox School of Theology in Boston, where he taught as a visiting professor for one semester.

In March 2005, at the proposal of His All Holiness Ecumenical Patriarch Bartholomew, he was promoted by the Holy and Sacred Synod to the position of Chief Secretary and was ordained to the priesthood by the Ecumenical Patriarch in the Patriarchal Cathedral. In 2009, he submitted two dissertations to the Theological School of Thessaloniki and was unanimously elected Assistant Professor of Symbolics, Inter-Orthodox Relations and the Ecumenical Movement. The dissertations are entitled: “The Synaxis’s of the Hierarchy of the Ecumenical Throne (1951-2004)” and “Luther’s Ninety-five Thesis. Historical and Theological aspects. Text – Translation – Commentary “.

In March 2011, he was elected Metropolitan of Bursa and in August of the same year was appointed Abbot of the Holy Patriarchal and Stavropegial Monastery of the Holy Trinity on the island of Chalki. He has served as the Orthodox Secretary of the Joint International Commission for the Theological Dialogue between the Orthodox Church and the Lutheran World Federation and as a member of the Patriarchal delegations to the General Assemblies of the Conference of European Churches and the World Council of Churches. He was the Secretary of the Pan-Orthodox Synods in Sofia (1998), Istanbul (2005), Geneva (2006), and Istanbul (2008). He has been a member of the Faith and Order Commission of the World Council of Churches since 1996. His Eminence Methodios, Metropolitan of Boston, is the spiritual leader of the Greek Orthodox Metropolis of Boston which includes all of Massachusetts, Maine, New Hampshire, Rhode Island Vermont and the Connecticut towns of Danielson, Enfield, New London and Norwich. The Metropolis, whose offices are located in Brookline, Massachusetts, consists of 63 parishes which minister to the needs of approximately 200,000 Greek Orthodox faithful.